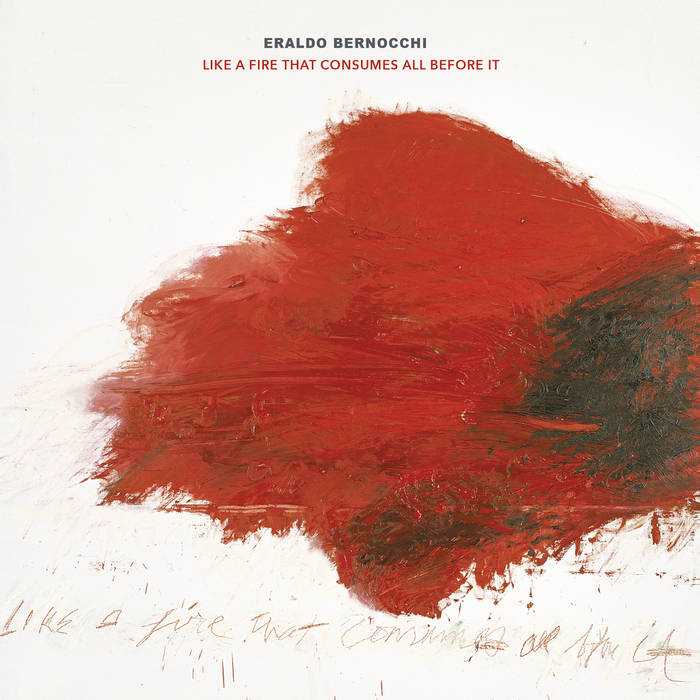 ajpoet An introspective and gently propulsive suite of ambient compositions. Bernocchi knows how to console and seduce with sound. Reminiscent of Robin Guthrie, Robert Fripp & Brian Eno. Favorite track: The Space Between.

RareNoiseRecords co-founder, multi-instrumentalist and composer Eraldo Bernocchi has created an evocative soundtrack for a new documentary film on American artist Cy Twombly. Imagined and produced by Michele Buongiorno, written and directed by Andrea Bettinetti, Cy Dear was presented privately at the Museum of Modern Art in New York City in the Spring of 2018 and will have its festival premiere this Fall. Bernocchi’s soundtrack is suitably atmospheric, underscoring the life and times of the American painter-sculptor-photographer, whose work influenced a generation of younger artists including Jean-Michel Basquiat, Anselm Kiefer, Francesco Clemente and Julian Schnabel.

“I had total freedom from the director and the production,” says the Italian guitarist and electronics maestro on creating the soundtrack to Cy Dear. “We worked as a team in order to create the best film possible in total freedom. Nobody ever asked me to change anything as my ideas were reflecting in a natural way those of the director and production. Each one of us melded and worked as if we had known each other forever. The end results are an incredible documentary and this record.”

While the atmospheric soundtrack to Cy Dear may recall Bernocchi’s previous ambient recording on RareNoise, 2005’s Winter Garden, his very personal statement on Like a Fire That Consumes All Before It casts its own compelling spell on listeners. “This work bears my signature,” he says. “It’s a side of me that’s always been there. Note after note, take after take, I became part of this story. I brought my memories.”

Though 80% of the sounds heard on Like a Fire That Consumes All Before It were generated by guitars, Bernocchi’s main instrument, they are adroitly disguised by the composer through deft use of echo, delay and reverb. “I used guitars mainly as a tool and when I really wanted to ‘sing’ a theme,” he says. “I had this guitar theme that was ringing in my ears and I started to sing harmonies that were dragging the piece deeper and deeper into the memory waters, where everything starts to blur and only emotions are floating. So I approached the guitars like an orchestra, layering part after part, singing aloud what I was hearing in my head and heart.
And when the music was emotionally taking over, I chose and selected those parts pushing on the edge of feelings.”

He cites the track “Like I Wasn’t There” as an example of using his sound processing techniques in the studio to create evocative feelings in the listener. “This is one of the most touching pieces of the soundtrack,” Bernocchi explains. “It’s about the whole relationship between father and son, the absence, the omnipresent art, the emptiness of rooms and palaces, the memories that slowly creep one after another until they build a story that is true but its communication form has been shaped by time and events.”
Bernocchi adds that none of the tracks on Like a Fire That Consumes All Before It were named for individual Twombly paintings. “The titles are related to moments in the film, to my personal experience/story, to people that were important for Cy Twombly and to words or phrases they said in the movie. This work had actually started as a soundtrack but in the end it became a story — his story, their story, my story. There are a lot of personal things in the music, mostly private. There’s a deep sense of memory in the documentary, a sense of time gone, brief meetings. Scene after scene, I realized there was a lot of my personal path too.”

As for the album title, the composer says, “It’s such a strong and meaningful phrase, perfectly describing my approach to life since I was a kid — the passion, the flame that in the end often consumes everything around yourself. Twombly painted it as part of the Iliad series but when I saw the paintings and the words I immediately thought it was perfect for the record.”

The final track on the collection, “Near By Distance,” is the only one that generates a steady, highly charged rhythmic pulse. “It’s dedicated to my friend (Swiss-born Italian trance music producer and DJ) Robert Miles, who passed away last year,” says Bernocchi. “The pulse just happened by chance. I liked it and I kept it. The piano theme reminded me of Robert’s melodies. I often think that I’d love to play it for him.”

Bernocchi’s created his soundtrack over a four-month span of intensive creativity. “I was inspired by the amazing and immortal story of this art giant,” he says of Twombly. “I was also inspired by his incredible paintings, by my memories, and also by the life he lived with Nicola dal Roscio, the adventures they surfed together. And in certain moments on this project I asked myself what Ennio Morricone, my favourite composer ever, would have done on specific tracks. He very likely would have reduced the number of instruments and layers to concentrate on themes and emotions. This is what I did on tracks where you can clearly ear a theme.”

Being self taught, Bernocchi has evolved his own vocabulary in the studio. It’s an approach based more on emotion than notation. “I know how I want to feel when I listen to a track and the emotions I’d like to live,” he says. “And the challenge on a project like this, where I played all the instruments myself, was to temper all the ideas I was planning to use. I hate overproduced music. Super-layered tracks make me nervous. I trust one note, one single note, a riff. That riff can say more than a whole orchestra. So, I had to keep the ‘other me’ at bay sometimes and be absolutely merciless. Because in the end, Cy Twombly was the protagonist in this story, not me.”

Like a Fire That Consumes All Before It, the fourth Bernocchi release on RareNoise Records, is scheduled for a November release.

Bandcamp Daily  your guide to the world of Bandcamp